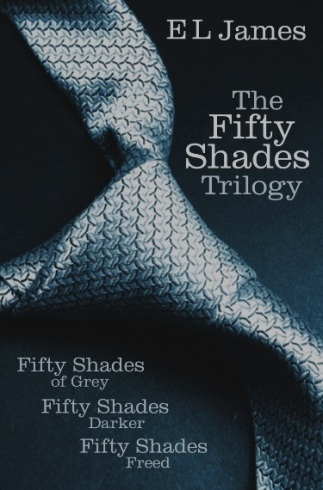 This was the book which inspired the creation of this blog. I had absolutely no intention of reading this godforsaken trilogy until a friend posted an excerpt on Facebook. I remember reading the excerpt and thinking that it was a joke, and that there was no way that this was from a real novel. Obviously, there has been quite the media frenzy surrounding this book but honestly, I cannot for the life of me understand why… It has taken me 6 months to recover from this literary train wreck and write this review.

It has a standard billionaire-meets-virgin plot, he’s high-powered exec and she’s an average college student in her final year. They are unceremoniously thrown together when Anastasia Steele helps out a sick friend by interviewing Christian Grey on her friend’s behalf. Christian decides that he has taken a liking to Ana, and Christian always gets what he wants. Obviously he has a secret that he is not willing to share while she has the curiosity of Pandora with the mental capacity of a gnat. After a brief “courtship”, Christian decides to ask Ana to be his submissive. She is shown the contract and the ins and outs are all explained to her. Christian makes it very clear that this is not to be a romantic relationship. He doesn’t do love, boxes of chocolates and flowers. He simply wants her body and her compliance.

Christian is tormented by his past and Ana has never really been in a relationship before. What could possibly go wrong? They enter into a strange relationship with many limitation. Mostly, limitations set out by Christian in a futile attempt to control every aspect of his world.They fight, she cries a lot, they make-up and they seemingly overcome their difficulties. I don’t want to bore you with this, so check out the blurbs for all three novels on Amazon.

In a word? Unimaginative. The writing is stilted and dull. All three books are written entirely from Ana’s perspective, and unless you are a talented author, first person narratives become boring very fast. There is no ingenuity where plot devices are concerned. The usual suspects are all accounted for:

Even though these devices are tired and overused, I was more concerned with the language skill employed in the writing of these books. Or rather, the lack thereof. It felt like E. L. James was sans editor for these books. I don’t think she has ever heard of an adjective, as her most frequent means of description is one of these gems: “She looked at me with one of her you’ve-got-to-be-joking looks.” Isn’t this just lazy? Somewhere halfway through book 2 the writing improves marginally but then degenerates to its former babble by book 3. The author and the editor tried to hide all this from the reader in an over abundance of detail. A wise man, who goes by the name of Stygian_Mole, once said to me that a bad writer hides behind the detail. This has never been more true. At one point, James spent almost two pages describing Christian’s office. It made no determinable difference to the rest of the book or future plot but by the end of it I knew exactly what was hanging on the walls and the number of brush strokes it took to complete each painting to the grain of the leather used on the couches and life story of the cow that it came from. The writing in these novels is so static that James eventually ran out of synonyms for the colour red when describing Ana’s degree of blush and embarrassment. That girl blushed so often and with such intensity I worried that she would suffer permanent capillary damage and her face would be red forever.

There is very little character development throughout the trilogy. Ana is naive and at times comes across as ignorant, while Christian is constantly contradicting himself and playing juvenile mind games. Due to the style employed by James, Ana has an ongoing, yet limited, internal dialogue which manifests throughout the books. The most common phrases that came out of this dialogue are: “wow”, “holy shit/hell/fuck/crap”, “oh my” and “jeez”. These phrases are used in excess of 1500 times in the course of the three books. Another aspect of Ana’s internal dialogue is her constant interaction with two parts of her personality, namely: her inner diva and her subconscious self. She seems to consider her inner diva a slut for begin interest in the kinky sex that Christian was proposing, while I have absolutely no idea what her subconscious self is meant to be for. The way it is written about, I think James got confused between someone’s conscience and their unconscious (subconscious isn’t actually the correct term but most authors use this instead of unconscious).

I have never been more angered by a book in my life. I have read a great many novels over the years and often I come across ideology that I may not agree with or think is antiquated but I have never gotten upset or angry about it. It’s just a book after all. The more I thought about the story, the angrier I got. The portrayal of Ana and Christian’s relationship caused flashbacks to every bad, co-dependent, unhealthy relationship I have ever had. This trilogy romanticises these negative relationships.

Christian is controlling, to the point of dictating what she wears. For the purposes of the contract and her role as his submissive, I understand the reason for this when in the bedroom but this then spills over into her everyday life as well. His character is dictatorial, irrational and jealous but this is entirely explained and glossed over in the guise of him being an Alpha Male. He has an unhealthy obsession with her eating patterns and lack of calorie intake but instead of having a discussion, he barks orders at her and gets her to eat by threatening her. I was concerned he was trying to make human foie gras. It read much like a parent telling their child to finish their veggies. Ana is naive and, at times, down right enraging in her “innocence”. Instead of seeming provincial or sheltered, due to her lack of worldly knowledge, she comes across as a spineless doormat. At one point, Christian (a supposed multi-billion dollar corporate CEO with a business to run) takes time out of his busy day to visit Ana at work and confront her about not changing her name to “Anastasia Grey” on her company e-mail address since they had married. Really? Clearly these are the most important issues in a marriage. Ana on the other hand is so emotionally stunted that when Christian orders her to remain at home, due to a threat against her life, she doesn’t turn around and go to work with the army of body guards he has following her at any given time, but rather thinks: “he is keeping me at home because he loves me”. It would be different if this had been a discussion between the characters but, again, Christian’s character dictates what Ana is to do. He becomes angry when she has an opinion or thought that is different to his and goes into raging tirades when she expresses these opinions. Ana on the other hand doesn’t open her mouth enough and ends up allowing herself to be dictated to. When you put all these things together, you have the beginnings of a classic abusive relationship.

At the end of the first book, I was given hope when Ana leaves Christian because of his behaviour. This hope was taken from me and cruelly torn asunder when I started the second book where Ana is portrayed as being in the throes of a deep depression due to the separation. Only to realise that they have been broken-up for a sum total of 3 days. I nearly cried at the immature, teenage angst that this novel threw at me. These are meant to be adults, making adult decisions and she is lamenting the lack of the sun’s warmth and the ashen texture of food as a result of Christian’s  removal from her life. God help me. We have all gone through some sort of harrowing break-up at some point in our lives. I’m sure many of you have felt like you would lose the ability to breath without that person by your side. It happens. After only 3 weeks of dating? I don’t think so. After 3 weeks of dating, you barely know the person! And that, my friends it the timeline we are working with here.  The entire first book in this trilogy spans all of 3 weeks! 4 at a push. Add another 3 weeks to that and they are suddenly engaged. This is never a good idea, but lets just go back and remember that Christian made it very clear throughout the first book that he does not do romantic relationships. Suddenly, he’s completely on board with the lifelong commitment to marriage.

This trilogy was the single most painful literary experience of my life, and I have read Velociraptor Porn people. It became a painful chore to finish these books. I even resorted to reading a good novel to take a break from this disaster. The reason for this is that E. L. James, and the publishing house that decided to unleash this shitty novel into the world, actually take themselves seriously. Let’s remember that the concept for these novels started out as Twilight fanfiction. I have nothing against fanfic, and I am an avid follower of several fanfic authors but not all fanfictions are created equal. I think the fact that this was once fanfiction shows in the writing style of the book. It was almost as if the editor took the fanfiction, changed the character names and put it into print. The style of writing in these books is easily found on fanfiction sites but it doesn’t work for novels. A great deal of editing goes into any good fanfiction, and even more editing should go into turning fanfiction into a novel.

The lasting legacy of this trilogy is the proliferation of even shittier faux-BDSM novels and novellas flooding the market.  Much like Twilight it also re-enforced that you cannot be disconnected from your significant other for a second, clearly illustrated by the pages upon pages of e-mails and text messages penned in these books, and the irrational fear that something has happened to one of the characters when they do not immediately reply. All in all, this was a tremendously tedious trilogy with no redeeming factors. DO NOT read these books, they will leave you angry, annoyed, and possibly, dumber than when you started reading them.

Buy the 50 Shade of Grey Trilogy at Amazon.com

If you are interested in trying out some good fanfiction, check out some of Fragile Dream‘s musings. She restored my faith in fanfiction after my disappointment with these books and their fanfictional beginnings.

Also, if you watched and hated the film as much as I hated these “books”, check out the Honest Trailer. If you are like me, you love parodies do go and have a look at 50 Sheds of Grey and its sequel 50 Sheds Damper on Amazon.

One thought on “Book Review: 50 Shades of Grey – A Dull Trilogy”