Anyone who knows me that I am one of the biggest Batman fans out there. So it was a no brainer that I would buy this game. What was not guaranteed was just how much I enjoyed it!

Without giving too much of the plot away, Scarecrow and the merry ban of Gotham criminals, we all love to hate, convene about a year after the events of Arkham City and thus, the Joker’s death. They have one goal. The same goal they always have. Destroy the Bat.

Scarecrow, who is beautifully voiced by John Noble, employs the help of someone who calls himself the Arkham Knight. His origins are unknown, his identity unknown, affiliations unknown but he seems to know everything about Batman, including his identity. With the use of a nightmare machine and his infamous mind bending fear gas, Scarecrow intends to raze the city to the ground by having it tear itself apart from the inside out.

It wouldn’t be Batman without an array of the usual gadgets and weapons, ordinarily supplied by Lucius. The Batwing, explosive gel, grappling claw, smoke pellets and such are ever-present. I did enjoy the Disruptor, supplied by Nightwing, as it was a welcome inclusion to the Bat’s arsenal. It could be used to disable drones, guns, medic assist packs, sick sticks, among other things. It was extremely nifty and usually aided in evening out the odds when going up against a gang of heavily armed men.

The true star of the show was the Batmobile. It was truly, a thing of beauty. Not only did it look fantastic with its sleek black lines and battle ready sexy armour, but it was also a dream to control and maneuver. With two modes (pursuit and battle) it was easy to use in both modes. 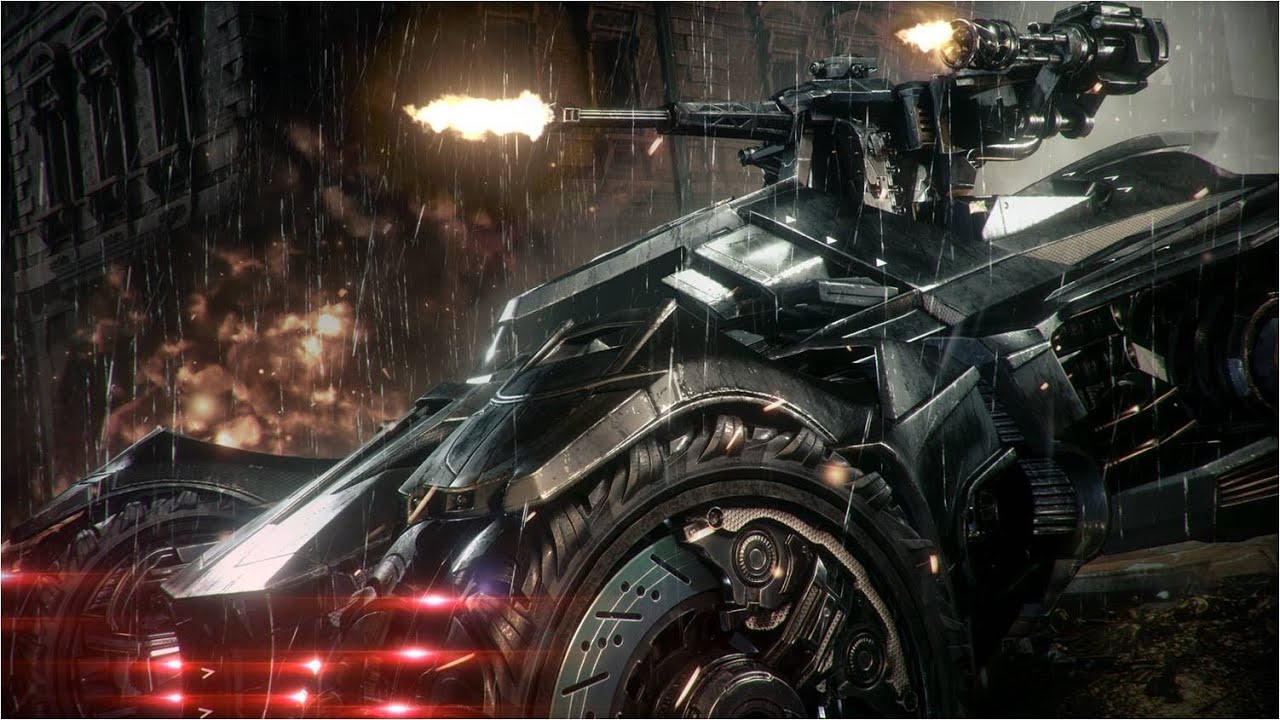 It also comes fully equipped with anti-tank guided missiles, a Vulcan chain gun, a 60mm cannon, together with EMP capability, scanning facility and a fully electrolised outer body making it tamper proof and fun to hit pedestrians with.

Overall, the gameplay was fluid and movement easy and unimpeded. That said, I was playing this on PS4, not PC and I heard all about that train wreck! The Next Gen yummy graphics were a wonder to behold, bolstered by that Unreal Engine 3 realness. Gotham has never looked this pretty. The controls were easy to use and simple to remember, despite the number of weapons and gadgets at your disposal. I especially enjoyed using the “dual takedown” option while being assisted by an ally (e.g. Catwoman, Robin or Nightwing). The transition between the characters was so smooth that I often didn’t realise that it had happened. The Batmobile assisted takedown was also hella fun.

I thoroughly enjoyed this installment of the Arkham series. And it’s not difficult to see why. Having said that, I am  not blind to its faults. The DLC is awesome and voluminous but the different Batmobile skins cannot be used in all modes. Some can only be used for race challenges.

Once all the individual story plots have been completed, there is very little reply value. This is partially addressed with the additional story missions introduced via DLC.

My biggest gripe, and this is important, is that you cannot see the final scene of the game (essentially the end of the story) without completing all story plots. The only reason this is a problem is because of the Riddler plot. With almost 300 Riddler challenges, riddles and trophies to find, it is time consuming and tedious. The number of things that the player must complete for the Riddler is akin to about two thirds of a separate game!

Other than this, and when compared to some of the other games released this year, this is a fantastic, fun addition to my library. It’s mindless fun, and a great way to de-stress after a long day at the office. Who doesn’t want to shoot high velocity beanbags at pedestrians while yelling “non-lethal” at the screen? (Yes, I do actually do this…)

Batman: Arkham Knight and its DLC are available for download via the PSN Store, the Xbox Games Store and various other outlets.