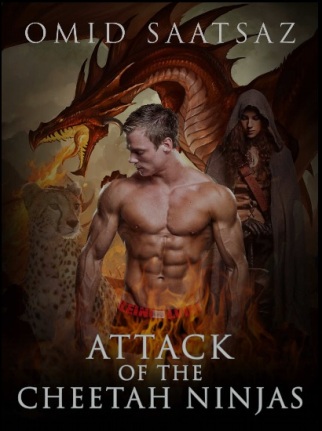 “Boldly, Elena reclines on her back, supporting her weight with one elbow, and begins to wipe down her torso. She splashes water onto her stomach and then swipes upwards, around and over her breasts, fingers brushing ever so lightly against her nipples. She tilts her head back and to the side, baring her throat in a universal sign of submission.”

From what I can gather, Elena is en route to a group of Red Panda shifters who are master apothecaries. Led by a stoic and severe wolf shifter, named Mead. Elena is frustrated, annoyed and confused by the fact that Mead does not seem to find her attractive, and seems entirely unaffected by her “charms”. She makes it her mission to get him in the sack before her journey is done.

Everything is going according to plan, and Elena is especially appreciative of Mead’s dominant, Alpha male tendencies. She likes the way he manhandles her and the way he takes charge. She’s not too keen on him abandoning her when the cheetah ninjas attack though.

Where to start? The only way that this writing “style” makes sense is if the author is not a native English speaker. He changes between tenses, active and passive, and even first and third person narrative (for BOTH characters!), there is little, to no, concord to be found but moderate syntax. It muddled my brain, as I was desperately trying to keep track of who was speaking, and what was happening. Confusing me so thoroughly in 61 double-spaced pages is actually impressive.

On top of all the grammatical errors, the spelling was dismal and the style rather formal and stilted.

“Each shift of Mead’s hips has the breath rushing from my lungs. It’s burning and pleasure all at once; the slick walls of my cunt fluttering and grabbing at him, trying to pull him deeper, trying to stop him from pulling out. Large arms wrap around my torso, nails digging in to my flesh, holding me close to his body. It’s fast and hard and everything that Elena’s been watching [sic]. She arches her back and presses against him, screams out her pleasure in to an otherwise quiet night. Shadows flick just out of sight but the warrior maiden is too far gone to pay them any mind. It doesn’t take long at all for the pain to vanish completely, and Elena finds herself almost disappointed at that realization.” (Locations 265-271)

This paragraph is a perfect example of the types of issues plaguing this story.

The story itself was rather pedestrian, and uninteresting. Couple that with the errors and issues, and you have something that is impossible to enjoy. I am often able to read a story despite errors, especially when the basic tale is engaging and interesting, or if the characters are well-rounded. This was not one of those times. I tried to make allowances for the likelihood that the author is not a first language speaker, and thus still finding his feet. Ultimately, this was not enough to salvage the wreck. I would absolutely not recommend this to anyone!

The Cheetah Ninjas didn’t even show up until right at the end.

Attack of the Cheetah Ninjas is no longer available on Amazon but it has been incorporated into Shapeshifter Assassin: Elena’s Paranormal Romance Short Story Series.

Saved by the Wolf

When an Alpha Purrs