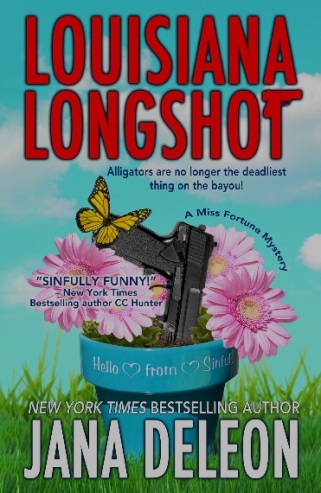 ““You know, I rarely ask for anything although I do a lot of favors—and God knows, I’m never going to fit in one of those size-four dresses they put you in—but why can’t you be kind to the shoes?” I looked down at what was remaining of the Prada shoes and felt a bit guilty.” (p. 2) Kindle Edition

“For a shot of whiskey and a pair of combat boots, I’d have grabbed the tailgate of Bubba’s truck and rode my luggage to the other side of town. But then that might have stood out. Likely, librarian ex-beauty queens didn’t ride luggage.” (p. 14) Kindle Edition

“Gertie reached into a huge handbag that looked like it was made from tapestry and dug out a Baggie. “Caroline had a chicken incident over at her place and didn’t get to making the welcome basket, so I had to improvise.” She held out the Baggie. “Prune?” (p. 14) Kindle Edition

“I paused before taking a sip of coffee and looked over the cup at Gertie. “Your sheriff’s name is Ida Belle?”

““And he caught you tossing your shoes into the bayou, trying to kill an alligator you thought was a frog, eating Sunday lunch with the Sinful Ladies, and the bone was found in your yard,” Ida Belle pointed out. “That’s a statistical improbability even for a town this size, especially given the amount of time you’ve been here.”” (p. 118) Kindle Edition

““Service starts at nine. Used to be eleven, but everything’s changed since The Banana Pudding War.”

““We ask these things in Your name,” the preacher said.

I was out the door before the “men” even dropped. The door to the Catholic church flew open as I dashed out into the street, and Gertie’s nemesis, Celia, barreled outside. The mid-morning sun hit her straight in the eyes, but she never slowed, running blindly down the sidewalk at a clip much faster than I ever would have imagined. But it was nothing compared with me. I could hear Gertie cheering behind me as I lifted the skirt of my dress and leapt over a snow cone stand. I slid a foot or so on the dusty sidewalk, then regained my footing just in time to push open the door to Francine’s and bolt inside. Celia huffed in a couple of seconds later and stood there, panting and glaring.” (p. 46) Kindle Edition

“I felt my pulse spike and a flush creep up my neck. I wasn’t opposed to lying, even on Sundays, but when I told the truth, I expected people to believe me. “Look—I just spent my morning slogging around on an island that smelled like a big turd, and Gertie was almost killed by an alligator. My nasal passages may never recover, and the worst part is, we didn’t find Marie there. No one knows where she is.”” (p. 100) Kindle Edition

“Rambo dog launched in that direction, and I spun and jumped for the top of the fence. I was halfway over before I realized a lock of my fake hair was caught in the bush. My head yanked backward and my eyes watered, but it was too late to stop the momentum. I tumbled over the top of the fence and the hair ripped from my head with a sickening tear.” (p. 111) Kindle Edition

“Ida Belle shook her head. “Daddy was real and as big a son of a bitch as we described him to be. I was already a good shot when I enlisted, but the military honed the skill to a level of precision that only another marksman would understand.” She gave me a shrewd look.” (p. 240) Kindle Edition