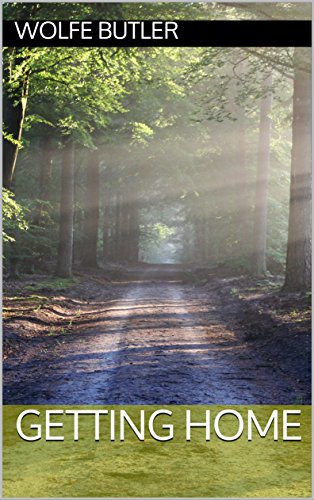 “At times it was like he was at a large party. He could hear the voices, oh so many voices, but none distinct or clear enough to be deciphered.”

From Amazon: Dealing with a past he cannot remember, a future he is not sure he wants and questioning everything from his sanity to his sexuality, Tom Jacobs feels ever more certain that the only solution is to end it all. A high level career, a perfect marriage, a power family – from the outside Tom seems to have everything he could want. Yet, try as he will, he cannot seem to escape a constant need to run. Plagued with nightmares and an ever increasing need to control his life with alcohol, Tom is spinning out of control. What begins as a mission to end it all becomes a twenty year journey to the life he was meant live. With unexpected turns, heartbreaking revelations and unlikely allies Tom is finally on the road that leads to Getting Home. [sic]

I was worried that time span covered in this novel would drag but the fluid story telling and comfortable narrative made this a very enjoyable read. Getting Home is a third person narrative, largely following Tom from age nineteen to almost forty. Occasionally, the narrative drifted to a different character for a brief reprieve from Tom’s life, and those snapshot were refreshing. I’m not sure how intentional it was but the narrative has a rather humdrum feel initially, when young Tom is dealing with depression, the start of alcohol addiction and following the same daily routine. This was very effective for understanding the character right at the start and providing insight into the emotional and psychological difficulties he is facing, even when the character cannot admit or recognise what it happening to/in his mind.

As the story progresses, the tone changes, appropriately. There are moments when the reader can almost feel his tangential happiness. Tom’s character feels like a spectator to his own life, together with the reader, and this makes you feel like you are experiencing the story right along with him. He seems to be, and feels, powerless at times, and this shared visceral experience engrosses the reader.

There were a few grammatical errors but these were usually a result of a missing word or the author’s chosen word order. The latter is not technically wrong but did inadvertently result in me reading the entire book in a bit of a Mississippi Southern accent. This in no way impacted the efficacy of the story, but rather added a certain charm to the narrative.

“But there never was an answer forthcoming and so he just dismissed it as simple stress.” (Locations 253-254)

“He never was quite sure why or from what, but he ran and ran knowing his life depended on it.” (Locations 585-586)

“These days it didn’t matter how much he drank or how little he slept, there never was peace.” (Location 1510)

“I drank because I never was able to say any of these things out loud.” (Location 2530)

“It never was a problem for him to stop and he knew that one drink would do nothing to mar that success.” (Locations 2840-2841)

“I never was unfaithful to you, Chari, never in all these years.” (Location 3626)

At times, the text was strangely formal, with few to no contractions used in the narrative, other than in direct speech. It felt almost unnatural to read because we all use contractions without a second thought. Again, this isn’t a negative thing but it does contribute greatly to the overall tone of the book. And it you are able to take a step back, it almost feels like you are sitting with an old friend while they spin you an intricate tale. That same feeling was bolstered by the fact that I could see a clear path being created by Tom’s actions, even though the character had not yet caught up. I found myself saying, “Don’t do it. Oh, he’s gonna do it.” out loud to the book more than once.

This was an extremely enjoyable book. I found myself thinking about it frequently during the days after I finished it. On the one hand it was rather sad, and you feel sorry for the fact that Tom didn’t really have the life that he could have had, but on the other hand, there is a lightness and appreciation for the fact that he was able to overcome his demons and find the help that he needed.

The alcoholism, depression and nightmares are advertised in the blurb, but the book deals rather deeply with some very dark and heavy events and issues. I think that Mr Butler was sensitive to these, and understood the delicacy of these issues. Mental illness and cognitive disassociation have become more and more popular in main stream films and literature over the past decade, and often authors and filmmaker gloss over the nitty-gritty aspects of these conditions. Tom’s behaviour when admitting that he is an alcoholic was nothing new to the reader. We’ve seen the belligerent, ostrich response many times in popular culture. It was interesting to feel like I knew exactly where the narrative was going to go next, as the reader, but that the main character had to catch up to me.

I particularly enjoyed that there wasn’t a traditional “happily ever after”, “ride off into the sunset” ending. This made the story feel more real, more believable. Life very rarely happens and works out the way we planned it or wanted it to. This novel is a great example of that, and how even though he didn’t get what the reader wanted, Tom got something far more worthwhile. And he needed to make many mistakes, and move backwards at times, in order to finally get to that destination.

Buy Getting Home on Amazon.

One thought on “Book Review: Getting Home – The 2 Steps Forward, 1 Step Back Programme”