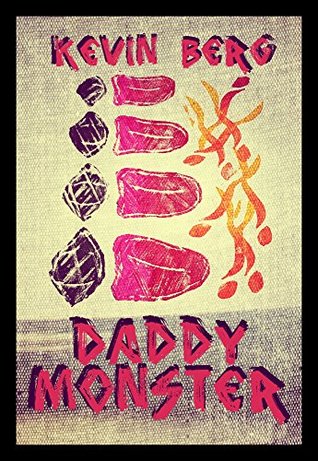 “Many times has he been targeted by the men and women he wished he could call friends, but hold no place in his heart as nothing more than coworkers. People who he is forced to spend eight hours of his day, five days of his agonizing week, pretending not to despise.”

From Amazon: Life couldn’t get any better.

A new baby, the promotion, the new house – everything is finally going his way. A happy family and the comfortable life don’t last long, though, once they start receiving visits from something that he does not understand. Or even believe.

His daughter, Little Olivia, is troubled by visions of a monster that only she can see.

He lurks in the shadows and lives on the edge of their perception, just out of sight, and sneaks in to steal the happiness from their dreams. But their frightening encounters with the unexplained serve only as a distraction, a break from the uncomfortable truth, will it be too late for him to realize what he has so easily forgotten?

Sometimes the things we need to fear most are closer than we expect.

This was a difficult book to get through because every action, sound and image was anthropomorphised. My brain was working overtime with all this imagery. I’m going to be brutally honest and say that most of it was entirely unnecessary, and actually hindered the plot and pacing of the story.

“Each movement, each sound, enormous and eternal in the silence of their escape, until finally, the scrape and thud of heavy boots bring them to the door. The squeal of a screen door and scream of plastic wheels in a metal guide are pushed into the air in front of heat that pulls them into its gentle caress. He steps in and sees movement in the kitchen, the sizzle of hot breakfast climbs up frozen limbs and crawls into his nose, the growl of his stomach swallows the movement and sound of the house and he almost doesn’t hear her.” (Locations 3377-3380)

This third person narrative also lacked adverbs, which killed the flow for me. Added to this were quite a few grammatical errors, missing words, and incomplete or incorrect sentences. I have shown my meaning in the extracts below:

His lungs gulp hungry at the fresh air, free from the stink of a disemboweled homeowner that lies limp and headless in the shack behind them. (Locations 3370-3371)

Interestingly, this isn’t badly written. I can see that a lot of time when into editing and rewriting, trying to get it just right, but at the end of the day – less is more. The text feels bloated, and in turn this caused the narrative to plod  along. The characterisation was feeble. I knew so many details about these characters day to day lives but nothing about them. The husband came across as a grade A asshole, incapable of sympathy for anyone but his daughter, Olivia (the daughter) seems far too intelligent, with a huge vocabulary, for a 4-5 year old, and the wife may as well have been left out of the story because she was kinda just the child-minder and baby maker, and offered an unnecessary link to possible paranormal explanations for what was happening to the family and in the house.

From the blurb, I was expecting intrigue, supernatural happenings and a twist ending. The first third of the book was a waste of time, for the author. The first two chapters could have been prefaced, with the story starting with husband, wife and toddler finding a new home and settling in. Instead, I had to wade through chapter after chapter of the husband’s daily grind, work bullshit and general unhappiness. I have enough of that in real life. This section should not have been as drawn out as it was. I got bored, constantly waiting for the “action” to begin. Further, I found most of the interactions and language between the husband and Dom, his coworker, to be crass and unrealistic. I’m not sure if working conditions are that much different in the US to where I live but the sort of conduct and language used in plain sight of other coworkers in the book would see heavy disciplinary charges at my place of business. This detracted from the immersion and wasn’t entirely necessary. Do men really talk about each other’s dicks all the time?

So, the action finally happens, and man does it fucking happen! Blood spilling out of baths and sinks, doors slamming and nightmares all round but it was so confusing. I genuinely couldn’t tell if what was happening was really happening or if the characters were dreaming or hallucinating. And not in a good way, where the narrative leaves it open ended for the reader to decide. At times, I quite literally could not figure out what was happening because of the bloated descriptive narrative where walls, doors, heaters, boilers, kettles, cars and children are all constantly screaming.

When the twist hit me in the third act, I was done. I just wanted it to end because my brain was tired of constantly having to interpret the narrative into imagery and context. I wasn’t surprised by the twist because I honestly could not figure out how we got there. I don’t want to spoil this book for anyone who is going to read it but the twist made no sense to me, whatsoever. I couldn’t figure out the why. All the way through the book, I was waiting for that one piece of evidence or slip up from a character that would make everything slot into place and puzzle would make sense but that never happened. I don’t know if that information was not in the book or if I simply missed it or my brain glossed over it but I simply didn’t find it.

I would really like someone else to read this and let me know what they think because I don’t want to be overly negative about the book but I genuinely feel like I missed huge chunks of information, but read this book twice!

Daddy Monster is available on Amazon.