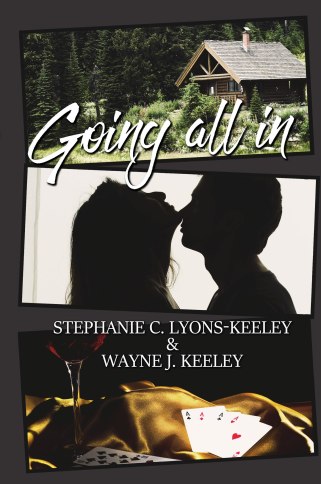 “It’s the ability to let go and move on, in poker and in life. This is the hardest lesson of all.”

From Amazon: Three mismatched suburban couples, Steve and Katie, Marty and Erin, and Scarlett and C. Thomas, have been neighbors and friends for years. During a pummeling Connecticut Nor’Easter, the members of the bored triptych engage in a friendly game of Texas Hold’em in front of a fire and over more than a few bottles of Merlot. The impromptu get-together eventually leads to the institution of alcohol-driven, bi-weekly poker nights.

One evening on a lark, someone suggests an alternate payout – instead of pocket change, the winner may choose a player (other than his or her spouse) with whom to spend the night. The proposition takes shape, but complications arise as these things will.

All too quickly, friendships are strained and relationships begin to crumble. Lies are told, truths are exposed, and feelings are hurt. In the end, can anyone bear the weight of this wanton self-indulgence? They are six fully consenting adults, and after all, it’s only a game. Or is it?

This book is fantastically written. The most common problem with dual authors is that the tone of the writing can, and often does, change between the two authors. This was not the case at all with Going All In. The beginning did feel a bit choppy but by chapter 3 the flow was well underway, and the book was almost impossible to put down. The only persistent problem that I found, which is making its way into more and more books, is this bizarre word order that many American authors use. The words “was” is always in the wrong place.

“Unfortunately multitasking never was one of Steve’s strong points.” (Location 410)

In the examples above, the two highlighted words should be swapped around, especially given the context that these sentences occur in. This is a recurring error throughout the narrative, likely because the authors are not aware that this is actually incorrect. Apart from this anomaly, there was very little wrong with the book, grammatically speaking. There was the frequent use of the phrase “pun intended”, which I found to be entirely unnecessary. A good double entendre or pun doesn’t need explanation. Further, this phrase became the literary equivalent of someone saying: “Did you see what I did there?”, while winking rapidly.

“Unfortunately, her mind still worked and she could think— about what was to come. Pun intended.” (Locations 1870-1871)

There were moments where certain words or phrases dated the the authors, more than they did the book. I can’t say that I have ever come across someone who still uses the phrase “stuffed shirt” when describing someone. I’ve only ever read it in older literature. This isn’t a bad thing because it is a fantastic, accurately descriptive phrase.

This book was utterly riveting. It started with a bang, and not at all how I expected it would. The characters were, somehow, both simple and complex, which is a wonderful feat of good writing. I particularly enjoyed that certain characters’ flaws were slow to emerge but that all the signs can be picked up in the story, if the reader is perceptive enough. There is some foreshadowing, which doesn’t break the story or spoil it’s outcome, but makes the narrative all the more compelling, if you do see it.

“She had a bad feeling that she’d set something in motion that night, something that couldn’t be stopped.” (Locations 2265-2266).

I enjoyed the cat and mouse game the authors played with me, as a reader. I was kept of my toes. I was impressed with the depth of character that each of the characters possessed on paper. Initially, I had been disappointed that the women, especially, seemed to be well-worn tropes but as the narrative progressed I realised that these were necessary for the direction of the narrative and the lessons to be learned from these dysfunctional couples. Though it might not have been deliberate, I identified seven very familiar “things” within these six character. Some in combination with others, within one character, and sometimes just one in a single character. Lust, Wrath, Greed, Gluttony, Sloth, Pride and Envy. It was fascinating to watch and a pleasure to witness it all unravel, at times with excessive glee. None of the characters is without fault, no-one is clean but there is clearly a ranging degree of depravity among group. I think I was only really sympathetic toward on of the character but at the end of they day, their lives and the dysfunction in them all boils down to their choices. The true test is seeing which of those characters own up to their choices, and by extension, their mistakes.

If, like me, you have lost your shit with your spouse over something utterly trivial, if you feel like you are unheard, underappreciated or unacknowledged in your efforts – give this book a read. I guarantee it will lend you some much needed perspective. If you like a little steam, a sexy tryst or two and subtle “whodunit”, definitely give this book a read.

Going All In is available on Amazon.

This review was requested by the authors.

One thought on “Book Review: Going All In – Kiss, Marry, Kill”