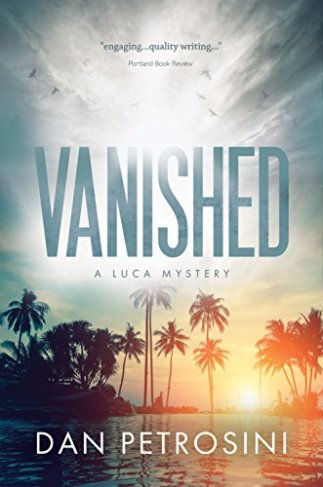 “I had a feeling from the get-go this slickster would try to make a move on her. I wondered what she thought of him. Of all the detectives in the world I had to get the one who looked like George Clooney.”

From Amazon: Obsession can be deadly.

Detective Frank Luca would tell anyone willing to listen it wasn’t his divorce but the tragic death of his partner that triggered his reboot. Either way, the move from New Jersey to S. W. Florida seems to be working. Relying on his instinct and cynicism to solve crimes, Luca becomes highly respected in his new home.
In Vanished, Luca works a missing persons case and soon discovers the mystery is about much more than a missing man. He believes there is something else, something dark and disturbing beneath the surface. As he develops a carousel of plausible suspects and motives, Luca is haunted by new episodes of self-doubt, all of which cloud his decision making.
Packed with betrayal, tension and obsession, Vanished is a stand alone novel in the Luca Mystery series.

I’m not usually a fan of first person narratives that switched between characters for each new chapter but this was a very enjoyable style for this story. This style is usually found in romance novels, which really tend to work my nerves. I’ve never come across it being used between protagonist and antagonist. It was fresh, and Mr Petrosini’s writing style compliment this format. I found the narrative easy to follow and enjoyable. As a result, I finished this book in about a day and a half.

“Man, what an embarrassment it would be if all this time Phil was sitting on a beach with his island family while Robin was organizing search parties. It’d be the top news story for weeks.” (Locations 546-547).

“If the philandering turned out to be nonsense, I’d have to consider turning my badge in. Maybe get an inside desk job to be sure I got my pension. The union would help me. I’d use the health card. It’d be easy, as long as I could swallow my pride.” (Locations 1337-1339)

“I’d been dogged by nightmares involving the Barrow kid, but they came never more than once every couple of weeks and never on consecutive days. Why the sudden ramp-up? Getting cancer, peeing like a girl, and having to take Viagra ain’t enough?” (Locations 2016-2018)

I found the usual minor errors, like strange word order, which seems to be an American thing but it wasn’t overwhelming or annoying as it was only an occasional occurrence. Some of the language was a little outdated for the present era but it added character to the narrative, and the characters in the book. Words and phrases like “slickster”, “wiseguy” and “to boot” aren’t that common anymore but fit with the gruff yet worldly-wise, astute detective and his partner.

I really like the characters in this story. Frank Luca is a close to middle-aged divorcee dealing with the loss of a partner, cancer, and who, after all his years working in law enforcement, still has a conscience and is haunted by what he deems to be his failures. All of these personal problems, hang-up and issues don’t bog down the story though. They influence his perception of himself and makes him question his competence as a detective but he never stops investigating. His new partner, Mary Ann Vargas is a well-rounded supporting character and the two work well together to further the narrative. Thought not complete opposites, they are different enough to ensure that the have separate views of a situation, but Vargas doesn’t allow her ego or pride to stop her from learning valuable lessons from Luca.

My favourite character was the antagonist, Dominick Stewart, who was just a walking “nice guy” cliché. I loved that each of his chapters started with an inspirational quote, which not only set the tone of the chapter but also really fit the character’s self-help obsession. It was unique and very well juxtaposed with Luca’s no nonsense approach to his work and life. Stewart is a guy focused solely on what he can get, and how to get it with as little work as possible. Yet, he sees his scheming, plotting, manipulation and maneuvering as hard, honest work. He’s an entitled little shit, who wants the world and all its riches handed to him.

As a procedural, I enjoyed that there was no “fight with the brass” trope and that this story showcased how tedious police work, even murder investigations, can be. It also illustrated that the “big break” doesn’t come through immediately, as many cop procedural T.V. shows would have you believe. It’s about time, patience, grunt work, and a lot of paper. At no point was the narrative slow or boring, though. And I find that to be impressive because it wasn’t a high octane rush to the finish with tons of action and drama but the writing and the story really kept me interested and wanting to know the who, why and how.

I haven’t read Book 1 of this series but I am interested to follow Frank Luca’s investigations and personal developments. I would definitely recommend this to anyone who enjoys cop procedurals. It’s a little different to most but more believable in terms of process and timelines.

“Detective Vargas is smarter than me, but it doesn’t take a genius to catch a killer. Just old-fashioned police work and a dash of the sciences.” (Locations 2770-2771)

Vanished is available on Amazon.