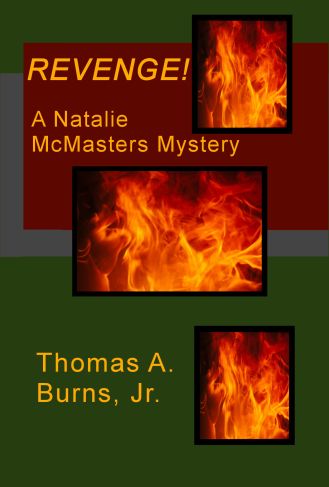 “When you kill someone, it changes you. Totally.”

From Amazon: Natalie McMasters is twenty, short and blonde (OK, it’s bleached), a way cute former stripper and a pre-law student at State. Nattie also works as a private detective at her uncle’s 3M Detective Agency. She’s deeply in love with her girlfriend Lupe, also a former stripper and undocumented immigrant, who’s now a pole-dancing instructor at a local gym. They’ve finally gotten Lupe’s eight-year-old son Eduardo into public school, and it looks like the American Dream may soon become a reality for their little family.

That is until a steamy video of Nattie and Lupe appears on the campus-wide closed-circuit TV system. The video is only the first of a series of distressing events that affects every aspect of Nattie’s life and threatens the well-being of her family and friends as well. What could Nattie have possibly done in her short life to deserve the callous revenge her unseen tormentor is so brutally exacting?

Revenge! is ripped from today’s headlines and full of the unexpected plot twists and non-stop action that Nattie’s fans have come to expect. It has a shocking ending that you won’t see coming, even though all the clues are there.

This is a first person narrative, with a lot of direct speech. This made large portions of the book feel very stop-start. It also makes the brain work harder, and can cause a disconnect between the reader and the narrative. This is a style of writing that I am coming across more and more. It reminds me of B-grade films that have large portions of the narrative explained via voice over rather than incorporating it into the actual script, scenes and character interactions. Ironically, the book didn’t start off like this. It was neat and well put together, initially, but eventually devolved into, at times, pages of direct speech.

A second by-product of this style of writing is the risk of the narrative becoming a series of instances. Character X goes to point A then point B then point C. It isn’t conducive to creating natural flow in the narrative.

Here’s an example of the direct speech I mention above. This exchange lasts for three pages before there is a significant break in direct speech. 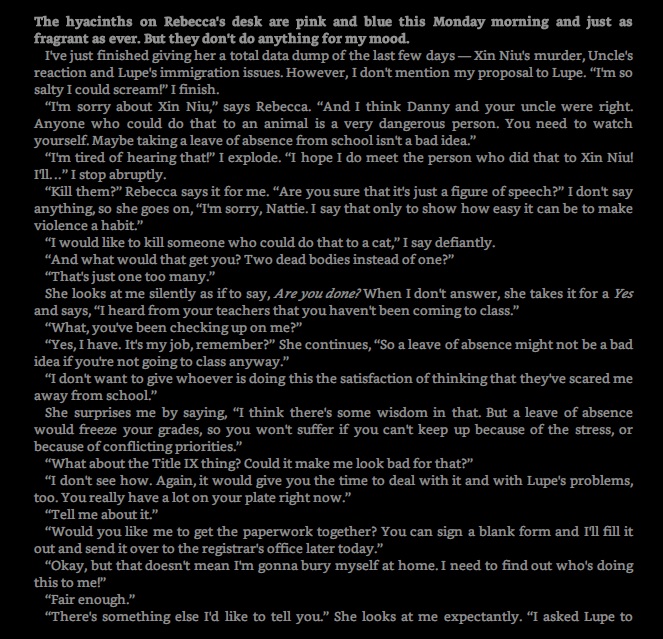 This might not be my favourite writing style but that might not affect other readers in the way that it does me. I found it difficult to really get into this book. I have to wonder if that difficulty was borne from not having read the first book in there series. I found that I had many unanswered questions about the protagonist, as well as the past events alluded to and significant to this story.

Nattie is young, she’s 19. She’s made some questionable choices but felt that these were all, ultimately, for the greater good. She’s worked as a makeshift P.I. for her uncle and fancies herself a gumshoe. That said, she’s so stupid. And that was annoying. The character is clearly meant to be young, maybe naive, but not stupid in the way that she was written. Yet, she seemed incapable of deductive reasoning at times, and struggled to put very obvious puzzle  pieces together. This frustrated me because I got about a third of the way through the book and kept wondering when the penny would drop for Nattie.

I also kept wondering where the character was getting money to go to university, pay for a therapist, lawyer and an apartment seemingly without a job, stipend or loans. These might seem like trivial things but as someone who lives in the real world, reading a story meant to mimic reality (not fantasy), these details matter. And could be easily solved by two lines of narrative.

Maybe this means that this book/series just isn’t for me. The character is young and I appreciate the author trying to make her sound young by using current slang and colloquialisms. That sort of detail goes a long way for building a narrative and character. The book also deals with some very serious themes, such as: sexuality, sexual assault, ideas of identity, the legalities around pornography and social dissemination of such materil, among others. It felt like Nattie was still discovering herself, which is suitable to anyone at 19 years old.

I would recommend this for young adults (18+), but not really for an older crowd.

Revenge! is available on Amazon. 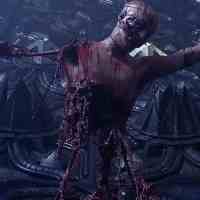 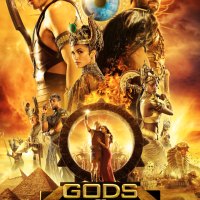